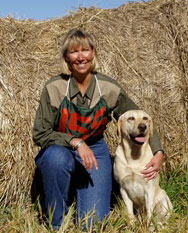 Missy grew up with two Cocker Spaniels her father trained for hunting. When she was 14, her father bought his first Labrador Retriever. She instantly fell in love with the breed and has owned Labradors ever since. After retiring from showing horses, Missy became intrigued with training her Labs for obedience and hunt test competitions. In 1992, she started training her yellow Lab, Rufus, to compete in AKC hunt tests and AKC obedience trials. Rufus earned his Companion Dog title, was her first Master Hunter and qualified for the Master National in 2000.  Her second trained Lab was a chocolate named Max who earned his Companion Dog title, a Junior Hunter title and then went on to become a certified Search and Rescue dog as part of a FEMA search team.

Since those early days, Missy has trained all of her dogs to a high standard enabling them to achieve recognition for their many accomplishments. She  pursued her passion of competing in the field with Hawkeye, a Master National Hunter, who completed the Master National in 2003, 2004 and 2009 earning him a spot in their Hall of Fame. Hawkeye was also Qualified All Age in AKC field trials, a certified therapy dog, appeared in television commercials and played a role on Cesar Millan’s The Dog Whisperer.  Her black Lab, Tex, is also a Master National Hunter who has competed successfully three Master Nationals in 2012, 2013 and 2014 earning his spot in the Master National Hall of Fame.  Tex enjoyed a successful Derby career as a 1 year old, is Qualified All Age and has placed in the Amateur stake in AKC field trials. He is a certified therapy dog and the main demo dog for obedience classes. Colt, Hawkeye’s son, was a Master Hunter and won the last Qualifying stake he ran earning his Qualified All Age designation in AKC field trials.  Colt qualified for two Master Nationals and passed the Master National in 2013. He was a certified therapy dog and did some search and rescue work. Rody, Tex’s son, is just beginning his field training and will compete in both field trials and hunt tests starting in 2015.  He earned his Canine Good Citizenship and Therapy Dog certifications when he was just a few days past the age of 1.

Upon leaving the corporate world in 2003, Missy decided to combine the teaching degree she earned in college with her love of animals and established a training facility for dog obedience. Using the experience she has gained from training her horses and dogs to a high level of achievement, Missy is now working at the family homestead where she grew up applying acommon sense approach to teaching manners to all breeds of dogs.

Learn more about our Basic, Intermediate, and Advanced Class schedules.

Hi Missy, I thought I’d write to express my appreciation of you and your training staff at Hope Lock Kennels. I’ve always taken pride in the training of my past dogs through the years, b...